I read and loved "V for Vendetta" years ago. Like all of Alan Moore's comics, it's a complicated story told with verve, style, and a strong grounding in history and literature. Moore regularly transcends the genre of "comics", really creating illustrated literature. "V for Vendetta" may be one of his greatest works - it's passionate, violent, affecting, and grounded in a deep dissatisfaction with real injustice in the world. It was a timely work, published during the height of the conservative ascendancy of the Reagan-Thatcher years.

The movie is every bit as timely, and very nearly as bold and articulate. "V" is by no means a sympathetic character; he is referred to by the totalitarian fascist government of near-future England as a terrorist, and the appellation is not inaccurate. The purity of his quest for social justice is marred by his own personal revenge, and a penchant for unapologetic murder. He uses or endangers other people, and has no regrets for doing so. The story is one of his righting-of-wrongs, but also of indoctrinating and opening the eyes of Evey, a girl caught up in the repression and horror of her fascist country.

For someone who had never read the comic, I think this movie would be particularly powerful. "V" is merciless, but not unprincipled. The fascists that he opposes are evil, but not implausible - especially in the context of current events. The near-future world is a frightening cautionary tale - and the action and plot are tight, the characters well drawn, and the story gripping and emotional. In particular I was blown away by Hugo "V" Weaving's ability to express worlds of nuance, all while masked as Guy Fawkes. Without facial expression, or indeed, any skin showing at all, "V" was very real, very human, and very expressive. The combination of technical artistry in lighting his eerie mask so that its expression seemed to dance, and Weaving's ability to convey nuance with stance and gesture without being overly broad was truly impressive. Indeed, when Evey asks to see his face, he says, "There is a face beneath this mask, but it is no more who I am than the muscles beneath the skin, or the bones beneath that." And he is absolutely right - V exists as a real, breathing, deeply human character, although it is strongly implied that he is something more.

Natalie Portman as "Evey" is deeply affecting, as well. It is in her place, through her eyes, that we experience the movie, and she is an effective character to evoke empathy. Portman handles the role with wide-eyed compassion, and a raw courage that shows what a remarkable actress she is. The most moving, powerful scene in the movie is lifted nearly unchanged from the book - and Portman lives up the best possible way to the challenge of a role that demands literally every last inch of her self, of her soul.

A fan of the comic may be disappointed - and in this case, I almost think it's better to see the movie first, in order to be delighted. The printed work's V is more philosophical, and has clearly-expressed principles of Anarchy as a political movement. He believes that all authority is inherently evil, and that it is the individual responsibility of every citizen to live an ethical life without recourse to force to sustain it. The time to shuck off authoritarian governments has come, and humanity must move past its primitive past of "rule of the gun" and even the rule of law. V is, therefore, somewhat mad - but he's a well-thought out kind of mad ... and it's something that's missing from the movie. Comic book V is a visionary - movie V is a seeker-of-revenge. In the printed work, the tools and constituents of the fascist government are more human, too. We have the time and leisure to work out their motivations, their doubts, their sorrows - something that is largely missing from the movie. Stephen Rhea, who is the Cheif Inspector brings a strong and credible humanity to the members of the government, but many of the other characters are lost in the shuffle. This is why it's perhaps best to see the movie first -- as a stand alone work of art, it's quite extraordinary. But it can't help but pale in comparison to the depth and excellence of Moore's original work.

I would rate this movie as one of the best, if not the best, comic book movies ever made. I recommend it in the highest possible turns. As a movie in-and-of-itself, I have no complaints at all. It is only in comparison to Moore's original work of genius that it suffers. 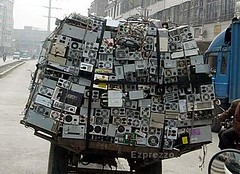